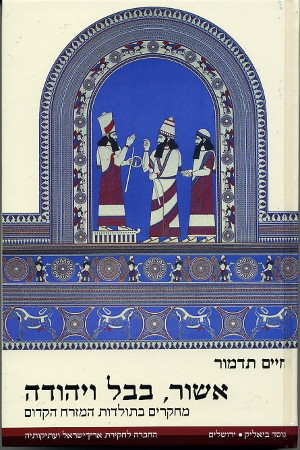 Studies in the History of the Ancient Near East

This book cosists of three sections: The first one discusses the historiographical nature of the Akkadian sources, especially the inscriptions of the Assyrian kings, in which the author reveals the expressions of the royal ideology that supported the conquests and expansion of the Assyrian Empire.

The second chapter deals with the main institutions of Mesopotamian society in the first millennium BCE, the organization of royal cities and temple cities in Assyria and Babylon, their inhabitants and officials.

The third chapter focuses on the influence of the Mesopotamian empires on Western countries in general, and on the cities of the country on the coast of Pleshet and the Kingdom of Judea in particular. It includes several articles on the days of the Babylonian exile and the return of Zion, the times of the shift between Babylon and Persia, which led to the renewal of life in the land of Judea.

Prof. Tadmor was the first Assyrologist in Israel, founder of the Department of Assyrology at the Hebrew University and taught there until his retirement. He was a member of the Israeli National Academy of Sciences and its vice president 1995-2004.